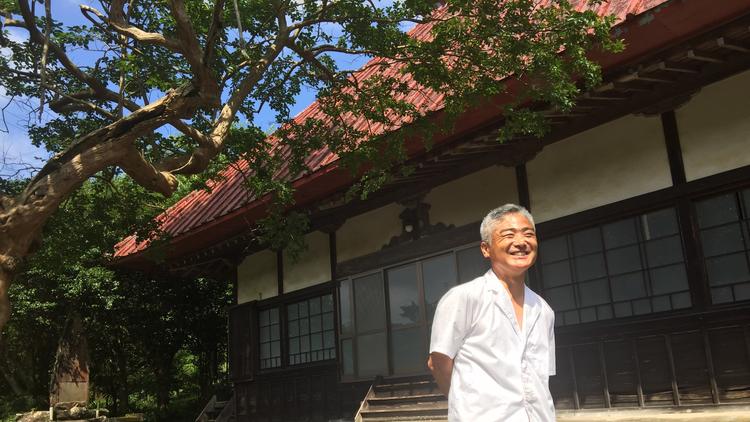 The red-roofed temple at the top of the hill closed about a decade ago, and now Yoshihiro Shibata can’t even remember its name, though the 54-year-old dairy farmer has lived in this picturesque village all his life.

A few years after the temple shut its doors, the village tea-processing factory closed down and the elementary school too. Now, the remaining students are bused an hour away.

“When I was young, we had about 100 kids here, but now there are just five,” Shibata said.

“The income of the temple depends on the number of residents, and there weren’t enough to keep a monk here,” he said, looking around the deserted grounds nestled amid the village’s lush landscape of tea plants and hydrangeas, bamboo and pine trees.

The local Shinto shrine is barely hanging on. With only about 250 households left in Hara-izumi, which is technically part of nearby Kakegawa city, the village no longer has enough men to hoist up the traditional float and parade it around during the shrine’s annual festival.

“They just set it out there and it doesn’t move,” Shibata said. In a few more years, even that may not be possible. “We’re supposed to lose half our population in the next decade.”

All across Japan, aging villages such as Hara-izumi have been quietly hollowing out for years, even as urban areas have continued to grow modestly. But like a creaky wooden roller coaster that slows at the top of the climb before plunging into a terrifying, steep descent, Japan’s population crested around 2010 with 128 million people and has since lost about 900,000 residents, last year’s census confirmed.

Now, the country has begun a white-knuckle ride in which it will shed about one-third of its population — 40 million people — by 2060, experts predict. In 30 years, 39% of Japan’s population will be 65 or older.

If the United States experienced a similar population contraction, it would be like losing every single inhabitant of California, New York, Texas and Florida — more than 100 million people.

Though demographers have long anticipated the transformation Japan is now facing, the country only now seems to be sobering up to the epic metamorphosis at hand.

Police and firefighters are grappling with the safety hazards of a growing number of vacant buildings. Transportation authorities are discussing which roads and bus lines are worth maintaining and cutting those they can no longer justify. Aging small-business owners and farmers are having trouble finding successors to take over their enterprises. Each year, the nation is shuttering 500 schools.

“Now, in every area — land planning, urban planning, economic planning — every branch of government is trying to do what they can,” said Reiko Hayashi, a researcher at the National Institute of Population and Social Security Research. 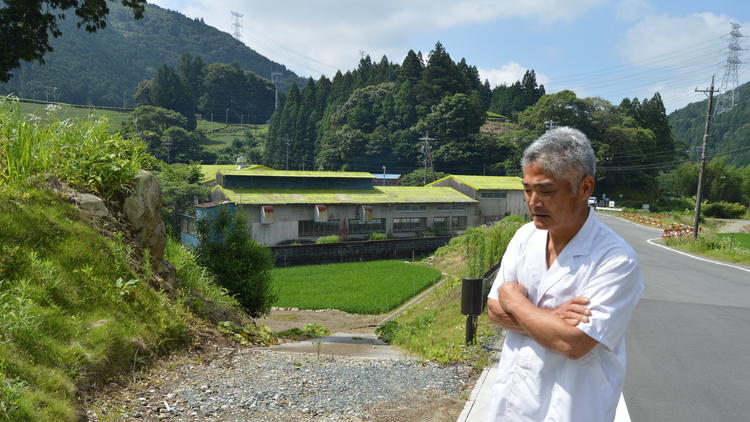 Yoshihiro Shibata stands in front of the tea-processing factory that was closed in his village several years ago. (Julie Makinen / Los Angeles Times)

Last fall, Prime Minister Shinzo Abe convened a panel of Cabinet ministers and experts and vowed that his administration would “bring a halt to the dwindling birthrate and aging population and maintain a population of 100 million people even 50 years from now.”

But barring a baby boom or a radical liberalization of Japan’s restrictive immigration policies, many experts say Abe’s goal is hopelessly out of reach. Although the government’s target fertility goal of 1.8 children per woman would still be below the replacement rate, even that isn’t realistic, Hayashi believes.

“This is a wish,” she said. “Our fertility measures were launched very late.”

“Everyone says the 100 million target is impossible without immigration. Within 30 years, half of local governments could be extinct,” said Takayuki Kubo of the Fukuoka Asian Urban Research Center. “But Japanese people don’t like sudden change.”

Japan had about 2.2 million registered foreigners as of December 2015. That’s a near doubling since 1980. Today in Tokyo, it’s possible to find Italians and Uzbeks working in 7-Elevens, while Bangladeshis are being hired as ski lift attendants at alpine resorts.

But foreigners still make up just 1.7% of the population, and that figure includes tens of thousands of ethnic Koreans who were born and raised in Japan but are not full Japanese citizens.

By contrast, the U.S. added more than 10 million immigrants between 2000 and 2013, and the foreign-born now make up about 13% of the population.

Ippei Torii, president of a nonprofit group called Solidarity Network with Migrants Japan, said leaders including Abe have clung to the idea of Japan as a mono-ethnic state, ignoring the presence of minority groups such as the Ainu in the north or the Ryukyu in Okinawa, not to mention Koreans.

Politicians, he added, have propagated the myth that foreigners commit crimes at a higher rate than Japanese and have suggested that more immigrants could make the country vulnerable to terrorism. Labor unions have also put up a fight.

“Look at nurses, they believe their income will be cut if we let in Filipinos and Indonesians,” said Katsuyuki Yakushiji, a sociologist at Toyo University in Tokyo. “They also say that these people can’t speak Japanese well and that could be risky. Yet, at the same time, they complain about severe overwork and say we need to add nurses.”

Toshihiro Menju, managing director of the Japan Center for International Exchange and author of several books about pluralism in Japan, said part of the issue is that key policymakers live in Tokyo, which is lively and flourishing.

“They don’t notice the seriousness of the problem,” he said.

The city of Fukuoka is actively looking to foreigners to help it buck Japan’s depopulation trend. Over the last five years, the city, the largest on the southern island of Kyushu, has grown 5.1% to 1.5 million residents. That’s the fastest rate in the nation, outpacing Tokyo, and it’s made Fukuoka the fifth-largest city in the country, ahead of better-known metropolises including Kyoto, Kawasaki and Kobe.

Unlike almost every other Japanese city aside from Tokyo and Osaka, Fukuoka is projected to keep growing, albeit slowly, through 2040, adding 100,000 to 300,000 people.

Under the most optimistic scenarios, Fukuoka’s foreign population would grow at 8% annually, rising from 28,000 now to almost 200,000.

To try to make that happen, Fukuoka is racing to attract more overseas students to its universities, then helping them find ways to stay and work.

“There’s still no consensus in Japanese society about immigration,” said Tang Yin, a Chinese scholar at the Fukuoka Asian Urban Research Center. “But it’s easier for people to accept people who are educated here.”

The tea-processing plant in Hara-izumi village has closed, but a hot spring opened more than a decade ago, and a campground attracts a steady stream of tourists. (Julie Makinen / Los Angeles Times)

In Hara-izumi, there’s no worry about an influx of foreigners. There are no immigrants here, nor the prospect of any. A bigger issue now is wildlife: The village’s population has become so sparse that wild bears, boars and deer are roaming the streets with increasing frequency.

Asked whether the village has a strategy like Fukuoka’s to increase the population, he shook his head. “No,” he said and laughed.

Hara-izumi can be reached only via a narrow, twisting road that snakes through a tunnel dug generations ago.

Still, residents have found ways to cope with their village’s smaller size, including a “mobile supermarket”  that visits once a week.

For now, Shibata said, he at least is doing well. His 26-year-old son is working with him on his farm, and they deliver milk to 400 customers weekly in nearby cities and sell more at farmers markets.

Hara-izumi opened a hot spring more than a decade ago, and a campground attracts a steady stream of tourists. Many of them visit Shibata’s cafe, situated alongside a picturesque stream, to enjoy soft-serve ice cream, yogurt and cookies shaped like cows.

“We still have beautiful scenery and a good road,” he said. “But if we cannot maintain the area, people won’t come. Then what will we do?”