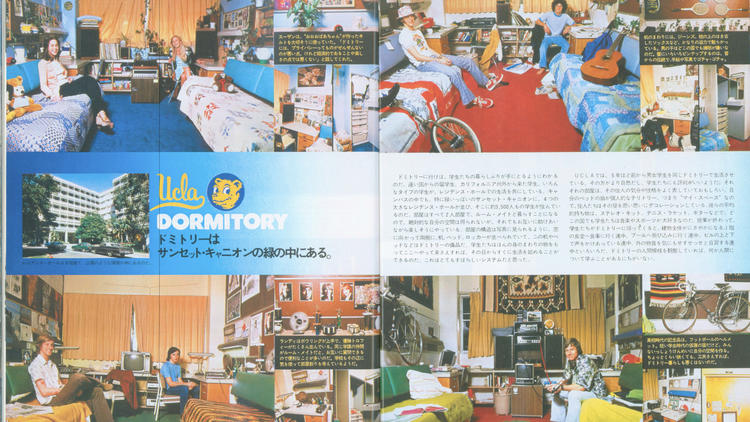 What’s hot on newsstands in Tokyo this month? Believe it or not, a 200-page Japanese magazine about life in Los Angeles — reprinted from 1976.

Twenty-seven pages are devoted to life at UCLA during the Gerald Ford administration, including a campus map and photos of dorm life and Ackerman Student Union (complete with state-of-the-art amenities like pinball machines and a “ride-sharing bulletin board”). The Kareem Abdul-Jabbar-led Lakers (who played at the Forum, where pretzels were 30 cents) are featured on five pages. 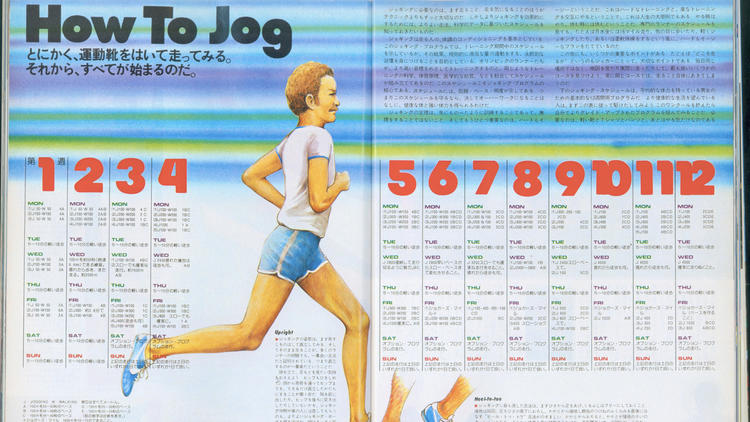 On Page 53 and you’ll find an illustrated spread on jogging. (Popeye)

If it sounds like a bizarre time capsule written by visitors from another planet, that’s not so far off the mark, said 86-year-old Yoshihisa Kinameri.

“It’s hard to capture the feeling now, but then, it was just all so different. We had seen running in the Olympics, but seeing jogging in real life was completely strange,” said Kinameri, the editor who sent four staffers to Southern California in early 1976 to capture the West Coast lifestyle for the inaugural issue of a new Japanese pop culture and fashion magazine called Popeye.

With its almost anthropological approach, Popeye delved into a country that was vaguely familiar to Japanese — thanks to the seven-year-long U.S. occupation  after World War II — but also still incredibly foreign. This month’s reprint of the 1976 inaugural edition has stirred up a mix of nostalgia for a more innocent age, and marvel at how Tokyo so quickly came to rival Los Angeles and other cosmopolitan capitals as a global trendsetter itself.

The mid-1970s were a tough time for Japan. The oil shock of 1973 had sent corporations reeling; the Japanese Red Army, a communist militant group, had been carrying out terrorist attacks around the world. The Sony Walkman had yet to be invented; international travel was something few young Japanese could afford.

Southern California’s ethos bowled over Kinameri and his compatriots.

“The hang gliding, the skateboarding, the variety of sneakers. It was all totally new. In Japan at the time, students had maybe two kinds of sneakers, and they were cheap and not stylish at all,” Kinameri recalled.

“In Los Angeles, people looked happy and cheerful,” he added. “It was magical; it was like heaven.” 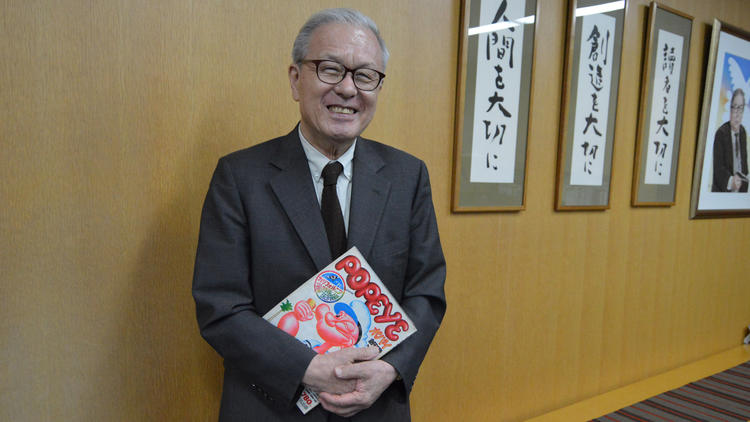 Kinameri and his colleagues had no inkling at the time, but Popeye would go on to become one of the most successful Japanese pop culture and fashion magazines ever. Aimed at young urban men called “city boys,” the publication was selling 700,000 copies per issue by the 1980s as its staffers ranged around the world, looking for the latest and greatest trends and styles.

With an “eye on pop,” Popeye was almost a “proto-Internet — enormous, timely guides of everything you needed to know [that was] happening at the moment,” said W. David Marx, who last year published a cultural history on Japanese menswear called “Ametora: How Japan Saved American Style.”

This summer, to mark Popeye’s 40th anniversary,  editor in chief Takahiro Kinoshita decided to return to where it all began with a special issue focused on California. He dispatched his writers to the Golden State, where they retraced some of the steps of Kinameri’s crew but also ventured to skid row and the dormitories of CalArts, plus Joshua Tree National Park, Pioneertown, San Francisco and Silicon Valley. 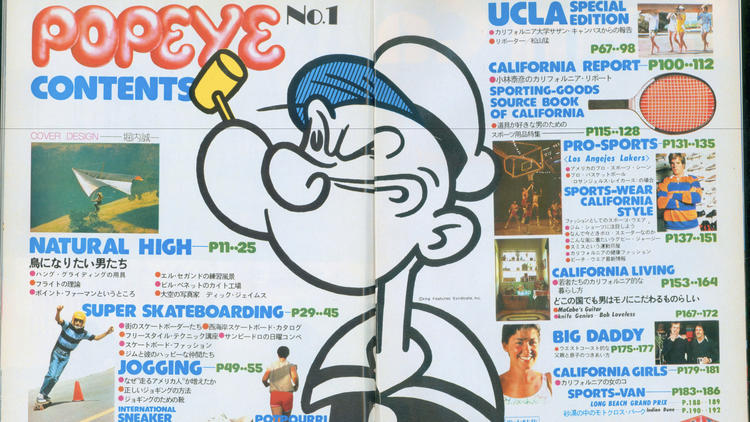 Tucked inside the July 2016 Popeye is a reprint of the full first edition from 1976 — identical except the ads from the original issue have been replaced by spots from a modern sponsor. The covers of both issues feature the cartoon character Popeye the Sailor, to which Kinameri negotiated the rights in the 1970s.

“We wanted to introduce the spirit of the original magazine’s editors,” Kinoshita said. “The reaction has been big. Older readers find it nostalgic, while younger readers are very interested in the 1970s design.”

Sometimes, it’s a bridge between generations. “The 1976 reprint issue explained to me about things my mom felt were cool decades ago,” said Naohiro Tamaki, 27, who works for an Internet company in Tokyo.

The anniversary has been the subject of at least one TV show in Japan, an exhibit in the Tokyo subway and bookstore discussions with some of the original writers. The magazine printed 150,000 copies — 30,000 more than normal — and has already sold more than 105,000.

Hiroyuki Yoshikawa, 52, a self-described salaryman who was looking at an issue of Popeye at a bookstore in Shinjuku this week, said he was a bit shocked to realize Popeye had been around for 40 years.

“I remember reading it as a young man and looking for places to take dates during the ’90s…. That seems like a long time ago,” he said. “The general content doesn’t seem to have changed much — how to look cool, be cool, get beautiful women.”

But Japan’s once-awed impressions of Los Angeles have changed, he said. “L.A. used to sound so glamorous. Now I think of riots or shootings,” Yoshikawa said. “It’s kind of amazing how much we admired America — how much influence it had on the culture and fashion.” 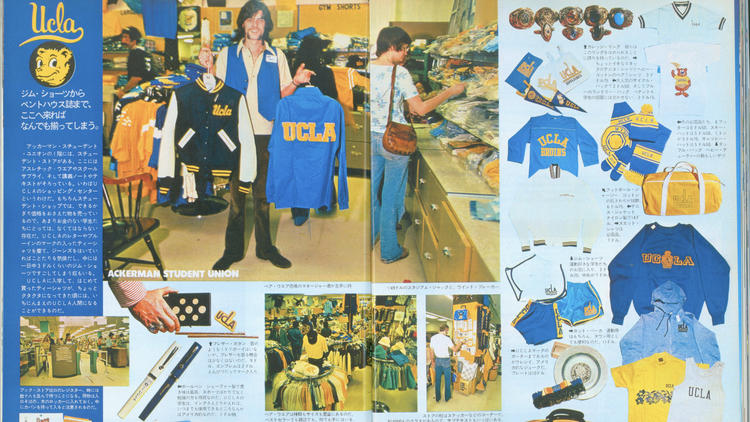 Readers of the 1976 edition can pore over a long feature on a radical new fashion trend — gym shorts (“they’re now worn on the streets”) — and four pages introducing a piece of attire called the “polo sweater.”

And there are seven pages of photographs cataloging 78 styles of fashionable sneakers and how much they sold for in the United States 40 years ago. Nike Oregon waffle soles, in yellow and green, were $25.95. (They’re sold on EBay now for $1,000.) 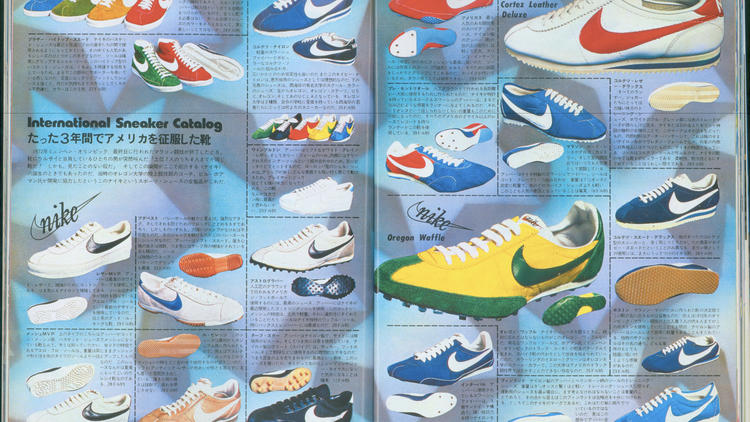 Seven pages of photographs cataloging 78 styles of fashionable sneakers and how much they sold for in the United States 40 years ago. Nike Oregon waffle soles, in yellow and green, were $25.95. (Popeye)

These days, men around the world look to Japan for fashion trends and some of the highest-quality “American style” casual clothes made anywhere; meanwhile, hipster American brands like the Hill-Side from Brooklyn even use Japanese-made denim and fabrics. But all that wasn’t preordained, Marx said.

“People assume that Japanese of course would just love jeans and all this American style,” Marx said. “But in the early 1960s, people in Japan didn’t have a lot of money to spend on fashion. Only deviants and outcasts would buy American jeans or Hawaiian shirts.”

Popeye grew out of two earlier America-focused Japanese publications — a magazine called Ski Life and a two-volume catalog-type publication called Made in U.S.A. — put together by the same core group.

Eric Inoue, a USC grad-turned-ski bum who grew up in the Venice area, was working at Crossroads Drug in Aspen, Colo., when lead writer Jiro Ishikawa and his team walked into the store. Inoue tried out his awkward Japanese with the foreigners. Soon, he became a fixer of sorts for the group, helping them meet people and introducing them to all manner of American products.

“It was probably the best thing that ever happened to me,” said Inoue, now 71 and retired and living in Westchester.

After helping the group with Ski Life, Inoue traveled with them to Tennessee, New York, Texas and other places for the Made in U.S.A. catalog. Then came the Popeye project, a 50-day excursion across Southern California that involved interviewing and photographing sports-van enthusiasts and residents of Laurel Canyon, not to mention surf and skateboard pioneer Jeff Ho and hang-glider designer Bill Bennett.

“I didn’t even know that much about some of these people,” said Gordon Tani, a graphic designer and friend of Inoue’s who was recruited to help the Popeye team. He is 66 and lives in Cerritos. “I don’t know how Jiro knew all this stuff. It was before the Internet. But they just turned over every stone and reported what was interesting to their eye.”

The reporters took rolls upon rolls of film; illustrator Yasuhiko Kobayashi drew maps of Westwood and sketched pictures of ranch and Spanish-style homes. The reporters collected huge quantities of books and magazines for reference. 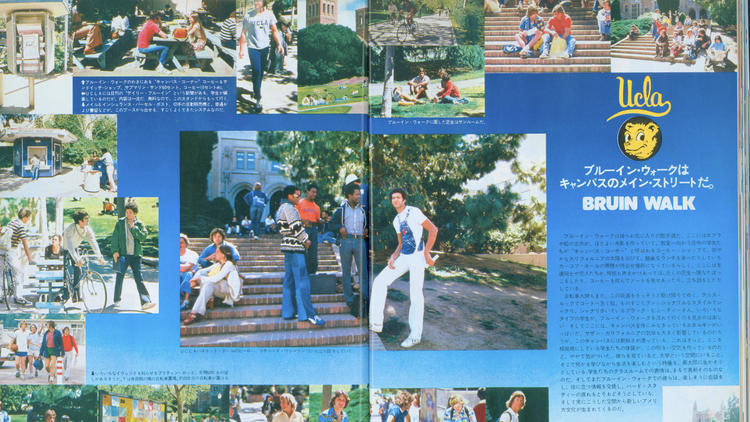 The huge takeout on the school helped turn UCLA into a major tourist destination — and later a university of aspiration — for Japanese youth. (Popeye)

“They were just interested in young people, free-spirited people,” Inoue said. “And people at the time were really willing to be interviewed. They were curious and open. It wasn’t like today where you had to get people to fill out a form and get permission for everything.”

One place that did require advance permission was UCLA, Tani said. “I had to send a letter to someone in the administration,” he said. After some brief consideration, campus authorities agreed.

The huge takeout on the school helped turn UCLA into a major tourist destination — and later a university of aspiration — for Japanese youth.

“For UCLA, it was a windfall. After the magazine came out, a lot of Japanese tourists went there, and eventually the bookstore had to put up signs in Japanese for the customers,” Tani said.

These days, Popeye is sold at Japanese bookstores like Kinokuniya in major cities around the world. It’s popular in New York and Paris, as well as Taiwan and Hong Kong, said Kinoshita, the current editor.

While the Popeye team has had a global outlook for decades, even after 40 years, California remains a place of aspiration and inspiration, Kinoshita said.

When he returned to L.A. this time, after a five-year absence, he said he was struck by a number of things, including Angelenos’ renewed interest in ceramic arts and the proliferation of tattoos.

“That, plus there’s kale everywhere,” he said, “and organic coffee.”

Special correspondent Jake Adelstein in Tokyo contributed to this report.